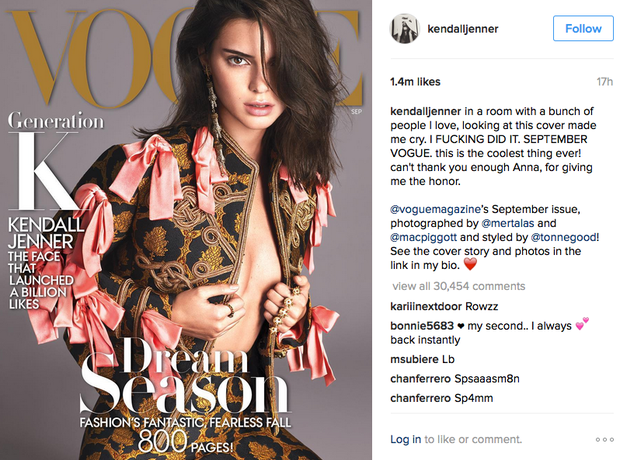 “I’ve been trying to take me seriously. This is not a joke or a trick.”

The girl ‘s 63.3 million followers on Instagram has managed to be the cover of VOGUE for September issue this year. Who was going to tell us ?
At 20 years, the American model nominated along with her sister as one of the major influences for teenagers by Time magazine, would never have imagined a few years ago that she would be the cover of one of the most important issues of the year for the magazine.

Nobody really expected. However, Kanye West saw the talent of the sisters ( already seen coming in “Keeping Up with the Kardashians” ) and bet on them.
We mentioned earlier that the fashion industry is very important Anna Wintour´s approval. And little Kendall has done it , seizing the cover of the magazine that is reserved for celebrities from the world of fashion.Kendall thanked Anna Wintour by Instagram for trusting her to this important issue.
She was photographed by Mert Alas and Marcus Piggott , wearing a fantastic two-piece of Gucci .
So yes. They have taken seriously.