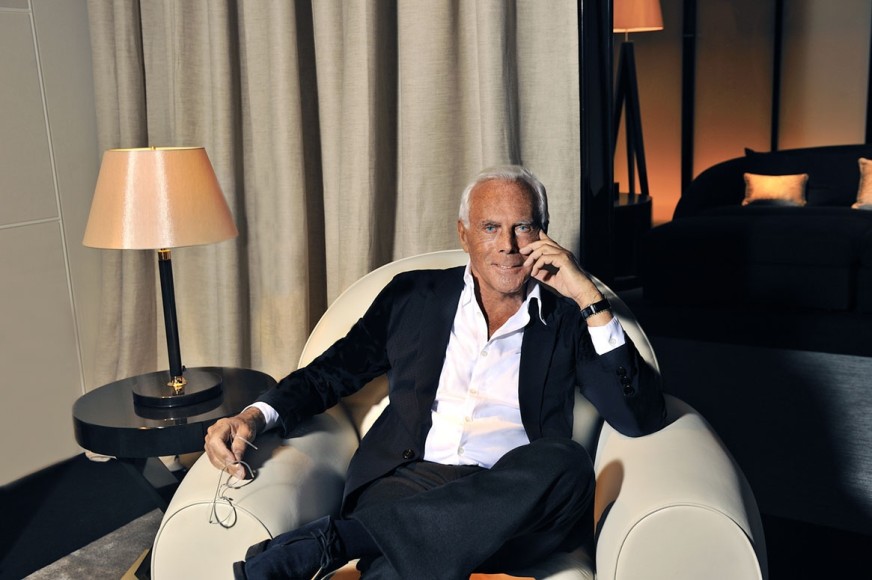 With more than 40 years of street fashion and with an estimated fortune of 7,000 million dollars (Forbes), designer Giorgio Armani is known worldwide for men’s clothing. The Italian designer was born in Piacenza on July 11, 1934 and at 83 years old is one of the most commercially successful designers in the history of fashion.
After studying medicine at the University of Milan, he realized that his true vocation was fashion. Thus began to work in The Rinascente (one of the most elegant shops of the continent), in which it was dedicated to decorate the windows. Years later, he began designing with Nino Cerruti. He had only been working for the firm for four years when he decided to open his own brand, Armani, along with his partner and couple Sergio Galeotti (who years later died of AIDS).


The society was captivated with the comfort of his clothes. Lines straight and sober but with a material of an excellent quality. While other designers throw themselves into colors that are more vivid, Giorgio Armani decides to take a more classic line. A sure hit. As for their line of women, the garments are intended to stylize women through a more androgynous style.
In addition to his undoubted talent, Giorgio Armani rose to fame with one of the most influential films of the 1980s: American Gigolo (Paul Schrader, 1980), a film in which the young Richard Gere wore signature clothing and that was a success. That’s how he revolutionized the world of fashion with a men’s suit that was loose, comfortable and with freer lines. It was called power suit and sowed elegance: in the 80’s appearance was everything.

His garments have appeared in over 400 films throughout his career. Other notable titles include The Dark Knight (Christopher Nolan, 2008), Inglourious Basterds (Quentin Tarantino, 2009) and The Wolf of Wall Street (Martin Scorsese, 2009).

After the big boom in Hollywood, Armani knew to take care of all type of public and soon, his costumes began to be the uniform par excellence, essential in any closet. His designs made and sigh to the masses. For this reason, it has more than 350 stores spread all over the world and also several lines within the firm such as Armani Jeans or Armani Privé, not counting the different lines it has related to the world of cosmetics.
Undoubtedly, Giorgio Armani has reinforced the importance of the Made in Italy label that thanks to him we relate to luxury and good quality. Both men and women, clothes are lovely. For this reason, on our website you can find preloved Armani clothing that  Luxury and Vintage Madrid team has selected exclusively for our customers.
We hope you enjoy it.